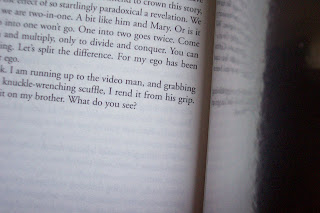 The Myth of Exile and Return by Desmond Traynor is a strange story of a man who stays at home and inhabits his twin brother's mind as he travels the world. It is very cleverly written with lots of wordplay that does risk verging on the irritating but mostly works for me. Lots of literary allusions too, but mostly of the sort where the phrases make sense even if you don't the original work they're alluding to. I really enjoyed the book and this is a delightful mirror on page 283 that reflects page 282....

The Myth of Exile and Return by Desmond Traynor, published by Silenzio Press.

I like to read a novel by Haruki Murakami every year and I'm sneaking this one in now before the 30 January deadline for the end of the Japanese Literature challenge.

Sputnik Sweetheart is Murakami at his best, beautifully written, entertaining, thought provoking and odd. Twenty two year old aspiring novelist Sumire is in love with Miu, an older woman, who likes Sumire but is unable to have a full relationship with anyone due to a mysterious incident that happened to her twenty years earlier.

The story is narrated by K, who himself loves Sumire, despite the fact that she is only interested in him as a friend.

The novel beautifully explores love and desire, loneliness and identity. The Sputnik in the title relates partly to Miu's misnaming the Beatniks and also to the comparisons drawn by K between lonley people and space satellites.

for the Japanese Literature Challenge
Shared by Crafty Green Poet at 8:03 pm 1 comment:

I've got a short story up at the Clarity of Night Silhouette competition, you can read it here. While you're over there you may want to read some of the other entries as well, there are some excellent pieces.....
Shared by Crafty Green Poet at 6:17 pm 3 comments:

alarm bells -
a man dressed in black runs
down a fire escape.
Shared by Crafty Green Poet at 4:52 pm 1 comment: