Ten Commandments for the Thriving Writer by Karen Banes

This short e-book by Karen Banes is full of useful advice for anyone wanting to pursue a freelancing writing career or just interested in widening the audience for their writing.

The advice is wide ranging and includes how to brainstorm ideas, how to build and organise a body of work, how to add value by publishing different pieces based on the same basic idea, how to network and collaborate with other writers and advice on self publishing and marketing and maximising your income.

The advice is concise, sensible and easy to follow. Much of it may not be new to writers who have a fair amount of experience, but it's always worth giving yourself a refresher course in essential techniques for improving your freelance writing career. And at only 35 pages, this book won't take very long to read, while the selected relevant links scattered through the test mean that you have the chance to follow up on your favourite topics.

Thanks Story Cartel for my free e-book version of Ten Commandements for the Thriving Writer by Karen Banes.
Shared by Crafty Green Poet at 4:56 pm No comments: 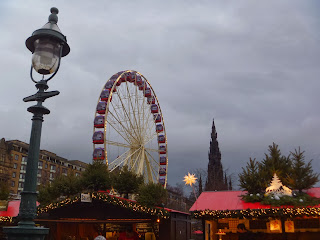 We visited the Edinburgh German Christmas Market today and enjoyed apple strudel with cherries and a mug of mulled wine with kirsch and watched the rain come down.

Shared by Crafty Green Poet at 3:50 pm No comments:

This gem of a book is packed full of creative prompts designed specifically to make you think and create blog posts, articles or stories, to explore issues, stimulate conversations or to share in creative writing classes.

The prompts are arranged in thematic chapters: Time and Place; People and Creatures; The Body and the Brain; Concepts; Money; Love and Entertainment and Mixed Bag. This is a useful way of organising your browsing through the book.

As i said at the beginning of the review, these are thought provoking prompts, designed to explore ideas rather than technique. Examples include:

When historians talk about the present day, what nickname do you think they'd give it and why? Would that nickname effectively convey the world you lived in? Why or why not?

**
During the oil crisis in 1973 and 1974, 20 percent of gas stations had no fuel at all to provide consumers. How would your day-to-day life be different if you and your family simply couldn't get gas? What changes might you have to make during such a crisis and why?

Each prompt can probably be used to good effect many times over, so this book is a great resource for any writer.

Thanks Story Cartel for my free download of this book.


Shared by Crafty Green Poet at 4:12 pm No comments:

The Fall of the Stone City by Ismail Kadare

I realised Ismail Kadare was a great writer when I read his novel Broken April, which tells the story of blood feuds in the mountains of Albania. I've been waiting for him to win the Nobel Prize for Literature ever since.

The Fall of the Stone City is set in Gjirokastër, Albania, birthplace of both Kadare himself and the Albanian communist leader Enver Hoxha.  The story starts in September 1943 as Nazi troops prepare to bombard the city. However, something stops them and it turns out that the Nazi colonel remembers he has an old friend from University living in Gjirokastër, Big Dr Gurameto, one of two surgeons in the city (the other who is also called Dr Gurameto). A reunion dinner ensues which leads to the doctor being considered a traitor, but then the hostages are released, soi perhaps he's a hero?

The story continues through the city's changing political fortunes. It's a city that has been invaded by foreign powers many times and is used to this, the residents carry on as though nothing has happened even as leaders come and go.

Thanks to Jim Murdoch, who sent me a spare copy of this novel and who wrote a much longer review of it last year!

The Fall of the Stone City by Ismail Kadare, published by Canongate.

As ever, coloured text contains hyperlinks that take you to other webpages where you can find out more.
Shared by Crafty Green Poet at 8:51 pm No comments:

She, your daughter or perhaps your niece,
has worked with refugees,
sewn on limbs blown off by mines,
read homelessness in women’s eyes –
the pain of the dispossessed.


You, an insurance man, say
‘they should better have weighed
the risks, avoided the temptation
of escape, stayed at home
for goodness sake!’


Safe and bored in suburban freedom,
you cannot imagine danger
surrounding your home
with paralysing fear
a time-bomb slowly ticking.