Abdallah works for a pittance in a Tunis video store where he delights in encouraging customers to try less commercial films. Behind his pride in his homeland though he dreams of leaving the country, inspired partly by his father, who had lived in the Netherlands for several years. Abdallah has a one night stand with a Dutch woman and soon after that loses his job, both of which make him more determined to leave the country.

Die Welt explores the dilemmas faced by young Tunisians, treating the subject matter with a light touch, including enjoyably witty dialogue and lots of vivid scenes set in varied locations including marketplaces, a traditional wedding party and a traditional baths.

The background to the film is interesting. The Dutch director (Alex Pitstra) has a Tunisian father (who plays the father in Die Welt) and the film was inspired by his reactions to the Jasmine Spring revolution in Tunisia. The film blends documentary into the fictional story, even including home videos of Pitstra's childhood in the Netherlands. This brings a revealing and insightful personal element into the film.

Die Welt is showing as part of the Edinburgh International Film Festival:

Disclaimer: I have a press pass for the Edinburgh international Film Festival and attended a free press screening of this film.

Shared by Crafty Green Poet at 10:07 am No comments:

Lilou, the ten year old daughter of a Guinean father and a Japanese mother, doesn't have friends at her school in Okinawa. She keeps herself pretty much to herself, even not liking to join the groups of children who congregate with her father to play drums and dance. Her classmate Kokuru, meanwhile has stopped dreaming and is upset about this, because she has been keeping a dream dairy so she has something to talk about with her grandfather. The two girls ave a lot in common, both of them have musicians as fathers and both of them are shy and serious. Kokuru had been too shy to speak to Lilou until she stopped dreaming and then felt she needed to reach out.

This marks the beginning of the two girls adventures, in which reality, dreams, myths and video games all start to merge into a beautifully surreal collage. But can Kokuru save her grandfather before time runs out? At times I was wanting to shake the characters and tell them to hurry up! Partly this was because it felt like a very long film (it's almost two hours long) but largely because the viewer gets really sucked into the flow of the film and engaged with the two main characters.

The two young actresses playing the main roles give wonderful performances and the friendship between the two is beautifully developed. The film is a lovely meditation on friendship, belonging and the nature of reality.

Lilou's Adventure is showing as part of the Edinburgh International Film Festival:

Disclaimer: I have a press pass for the Edinburgh International Film Festival and attended a free press screening of this film.

From Tehran to London

From Tehran to London is an unfinished film and presented as such as a testament of the censorship that film-making is subjected to in Iran.

Mania Akbari stopped the filming of the film when several Irainian film-makers had been arrested. She fled to London where she finished producing the film, but left the narrative unfinished.

The story centres on a couple, Ashkan, a wealthy business man and Ava, a poet, who is suffering from writer's block. Near the beginning of the film, their maid Maryam disappears while the couple are on a business trip. Later, Ava's sister has moved into the house.

The whole film is made up of claustrophobic dialogue between the characters, long arguments between the couple and gentler discussions between the sisters as they perform their beauty routines together. Ava is angry with her husband for many reasons, but partly because she feels he is blocking the publication of her latest book of poetry, so the issue of censorship was already at the heart of the film before the director was forced to stop filming.

This is a fascinating film for anyone interested in gender relations or artistic self expression in Iran.


Disclaimer, I have a press pass for the Edinburgh International Film Festival and attended a free press screening of this film.

You are a Writer (So Start Acting Like One!) by Jeff Goins

"Every day, somewhere, a writer is born." So opens this e-book from Jeff Goins.

If you are one of these writers, Goins says, then it is up to you to make sure you put in the time writing. Goins also underlines the importance of writing for yourself, following your passions rather than aiming to please the marketplace.

Sometimes I felt that Goins reiterated his main points too often, but there are certainly some good pointers here:

"Everything is practice. Every word you write .... is a chance to get better."

"If you do anything long enough, it becomes habitual".

If you've been writing for a while, you may feel there isn't enough concrete advice in here. Also on a personal level, I found Goins writing style to be pretty annoying.

The book overall reads like a pep talk, and most writers can probably use one of those once in a while. Basically, believe in yourself and you're a long way to being the writer you want to be.

As ever, coloured text contains hyperlinks that take you to other webpages where you can find out more.
Shared by Crafty Green Poet at 4:01 pm 1 comment:

Through a lace curtain 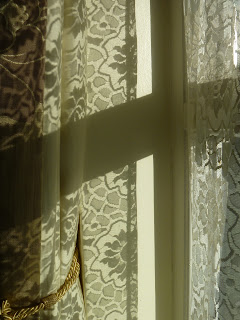 The curtains in our first hotel in Dumfries and Galloway. You can read more about our holiday on Crafty Green Poet: here, here and here.