I'm currently teaching a writing class on 'Writing Our Lives' and am reading through some memoirs to share with the class to give them an idea of the variety in this type of writing.

Fragments is an astonishing, powerful memoir about Binjamin Wilkormski's childhood in concentration camps and orphanages. It is never an easy read, but it is totally compelling.

If like me you have read a lot of books and watched a lot of films set during the Holocaust, you may think you are prepared for the horrors that lie in a book like this. I think though that this book gives more insights into the searing horror of the concentration camps than anything else I've read. The effect is particularly poignant because the author was so young at the time and he remembers things from a child's perspective. Things just happen to him and around him and he has no way of understanding or making sense of any of it, let along even hoping to have any control over things. The fragmented memories presented in the book, with memories from the concentration camp mixed up with memories from the orphanage, are incredibly powerful in the overall sense they give of hischildhood.

Most telling is how, when Wilmorski finds himself finally in a safe orphanage in Switzerland, he doesn't trust it and behaves as he would when he was in a concentration camp.

Talking of trust, though, I've just done an internet search to find a link for Binjamin Wilkomirski and apparently Fragments was in 1999 uncovered as a fabrication or more precisely a book based on false memories (It seems that Wilkimorski was actually Swiss, born Bruno Grosjean). I decided not to rewrite this review, the book remains just as powerful in its effect and still has truths to tell us about the Holocaust, and after all many novels have been written on the same topic. Or does the fact that it was fabricated and presented as a truth, now undermine it completely? What do you think?

You may be interested to read Why Would One Pretend to be a Victim of the Holocaust? which examines themes around false memories, with specific reference to Wilkomisrski's book.

As ever, coloured text contains hyperlinks to other webpages where you can find out more.

Shared by Crafty Green Poet at 10:16 am No comments:

If you buy a copy of my poetry pamphlet Unthinkable Skies from me (£4.50 plus postage and packing) I'll add in a free bookmark of this style, while stocks last. If you'd like a specific bookmark let me know, and I'll send it to you if it's still available otherwise it will be the most similar one still in stock.
Shared by Crafty Green Poet at 2:11 pm No comments:

Grave with Lights by JoAnne McKay

On our recent holiday in Dumfries and Galloway (which you can read about on Crafty Green Poet here, here, here and here) Crafty Green Boyfriend had a lovely lunch with poet JoAnne McKay, who blogs at Titus the Dog. JoAnne gave me a copy of her latest poetry pamphlet Grave with Lights.

The first thing you notice about this book is that it's a beautiful object, beautifully packaged in a handmade fabric cover. 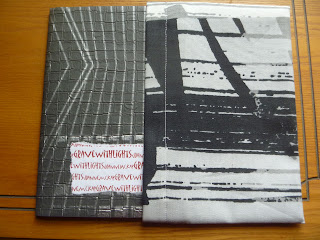 The beautiful presentation continues inside with paintings from Victor Henderson to complement the poetry. I do like poetry pamphlets that make full use of the possibilities of presentation, making the pamphlet a lovely thing in itself not just the plain vehicle for the poetry. There is a risk of style over substance of course, but this isn't an issue in this case as these poems certainly have plenty of substance. Variety too.

The poems here range over slaughterhouses, pets, damaged souls, waiting rooms and convents. My favourite poem is I Would Be Fast in which the speaker imagines herself a bicycle and the words whoosh along at the speed and rhythm of a cyclist:

There are only thirteen poems in this pamphlet, but they're all well worth reading and re-reading and the quality of the production means that you'll want to keep picking the book up!

Grave with Lights by JoAnne McKay, £10 plus postage and packaging, available here.

Email ThisBlogThis!Share to TwitterShare to FacebookShare to Pinterest
Musing on: books, poetry, review

When I was a child I used to watch in bemused fascination the cricket that my Dad used to follow on TV. So although I've never been a cricket fan I've certainly always had a certain interest which was very much piqued when I came across The Taliban Cricket Club. (In fact I won the book in a competition on the Curious Book Fans' website.)

The concept of Afghanistan under the Taliban deciding to start a national cricket team is one of those audaciously bizarre plot ideas that really grabs the readers attention (though this unlikely seeming premise is actually true though the novel is entirely fictional).

Rukhsana is a young Afghan woman, educated in Delhi and a respected journalist before the Taliban prevented her from working (at which point she went undercover in her writing). She had learned to play cricket in India and when her brother and cousins get the opportunity to put together a team she coaches them.

Rukhsana is a brilliant character, who the reader can engage with immediately. She is feisty and likeable, pulled between her desire for freedom and her love for her ageing and ill mother. The novel is very well plotted, with the several twists and turns reading entirely naturally, while keeping the reader guessing all the time. The political background is really well drawn too and Murari does an excellent job of weaving telling political detail into the narrative without it bogging down the plotting.

It may be far fetched in some ways, but it's engaging, entertaining and well written, while offering insights into Afghanistan under the Taliban.

The Taliban Cricket Club by Timeri N Murari published by Allen and Unwin.

As ever, coloured text takes you to other web-pages where you can find out more.


Shared by Crafty Green Poet at 2:09 pm No comments: