I was shocked to hear of the death of Australian poet and blogger Paul Squires, at the age of 46 after an accidental fall. Paul blogged at Gingatao and shared some of his poetry with us on Bolts of Silk. He had a unique poetic voice and was a generous and entertaining commentator on other people's blogs. He'll be much missed.
Shared by Crafty Green Poet at 3:19 pm 1 comment: 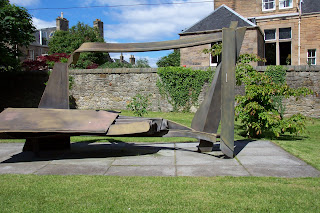 Foil by Anthony Caro in the grounds of the Gallery of Modern Art, Edinburgh

Drive the first novel by Greek based, Edinburgh born Andrew MacCallum Crawford follows a group of young men as they form a band and almost find fame and fortune while getting involved in various weird and wacky situations. The characters are very well drawn and believable and the dialogue is brilliant. The story moves along at a great pace and is entertaining throughout and often very funny. It's set in the Edinburgh of the 80s but an Edinburgh where many of the names of landmarks (particularly University buildings) have been changed, which is disconcerting for anyone who was a student in Edinburgh at the time the novel is set (which I was!) though otherwise it is a very accurate portrayal of the city at that time. The soundtrack to the novel is more or less exactly the music I was listening to when I was a student.

One of the most impressive things about this novel though is the author's use of Scots. The narrative is written in standard English but with a Scots rhythm to it, while the dialogue (for the Scottish characters!) is totally believably (and consistently) Scots.

Definitely an entertaining read, whether or not you were a student in Edinburgh in the 1980s!
Shared by Crafty Green Poet at 12:10 pm No comments:

Email ThisBlogThis!Share to TwitterShare to FacebookShare to Pinterest
Musing on: review

My life is a foreign land to you.

You pass through with binoculars,
notebook and camera, to capture
my quaint customs, unique features,
peculiarities.

I flinch from your gaze,
not ready to bare my soul to you,
an arrogant stranger with no respect
for my personal space.

You return to your own world
full of stories of me,
how good it was
getting to know me.

The value of cultural exchange.