Don't Look at Me that Way (film review)

Hedi (Uisenma Borchu) is the Mongolian neighbour of Iva, a German single mother living with her daughter Sophia. Hedi meets Sophia first and the two become friends but Iva is a little suspicious until she meets Hedi herself and the two women become friends and then lovers. Both women have male lovers as well and unusually for film (where normally bisexuality is portrayed as a phase until a character realises they're really gay / lesbian) the relationships are all just an acknowledged and accepted part of the two women's bisexual identity (though it would be nice if cinema could one day also acknowledge that bisexual characters can commit to a monogamous relationship and still be bisexual).

The relationship between the two women is very believable, as are both their relationships with Sophia, who is a lovely character, a really cheeky, amusing six year old.  Hedi is also a great character, treated to some degree as a scapegoat because she is different in so many ways to those around her, but also envied because of some of the freedoms her cultural difference gives her.

The scenes in Germany are interspersed with vivid scenes of Hedi taking Sophia to meet her grandmother in Mongolia, which are probably dream sequences though this isn't obvious.

I really enjoyed the film up until the point where Hedi starts a relationship with Iva's father. The cinematic trope of the much older man and the much younger woman has been done to death in my opinion and from that point onwards the film significantly deteriorates.

The film is directed by Uisenma Borchu and in this interview she talks about the film.

Shared by Crafty Green Poet at 6:15 pm No comments:

Email ThisBlogThis!Share to TwitterShare to FacebookShare to Pinterest
Musing on: films, review

Some thoughts about submission guidelines for literary journals

As a writer I know that it is up to me to read submissions guidelines for online literary magazines. I also know (as a former editor of an online literary journal) that it is quite easy to have one page of submissions guidelines and to up date that every time the guidelines change rather than to have a different page of almost identical guidelines for every issue of the journal (all of which are live and easily accessible from other websites) and only the page for the latest issue mentioning that the journal is now permanently closed to submissions. I am more than happy to read a lengthy page of guidelines, but not to then find out that it was the wrong lengthy page of guidelines and that I should have read one of the other many lengthy pages of guidelines.

Also although as a writer I am obviously aware of the need to check whether a journal is still open to submissions or whether it is closed for the next few months, on indefinite hiatus, or totally closed down, I am also aware as a former editor that it is quite easy to have 'Submissions Closed' stated clearly at the top of the home page rather than the potential contributor needing to scroll down a densely packed page in size 10 font before they find a wee note that says 'closed to submissions'.

So, editors please remember it's time consuming for both sides. Those of us submitting to your journal have lots of other things in our lives and how difficult is it for you to take those small steps to help make things easier for us?
Shared by Crafty Green Poet at 2:35 pm No comments: 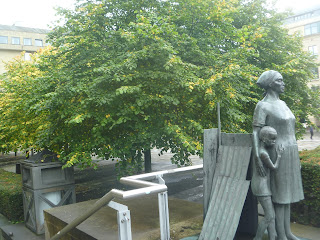