I was delighted to win copies of all the books shortlisted for the Scottish Book Awards (thanks so much to ForBooksSake for this!). I received the books in the middle of last week and thought the deadline for public voting was in the middle of August, but no it's TODAY! I have quickly read the books (well I'm still reading one of them) and here are my potted reviews and I will be voting before the end of the day:

The Breakfast Room by Stewart Conn - the latest poetry collection from a well respected Scottish poet. I find Conn uses too many pompous words to describe ordinary events without offering the reader any real insights.

Lyrics Alley by Leila Aboulela - a novel of family life in 1950s Sudan and Egypt. This is very vividly told and the central narrative about Nur, an aspiring poet who fulfils his literary dreams despite major setbacks is inspiring.

The Death of Lomond Friel by Sue Peebles - a novel of family life in Scotland, centring around Lomond who has just had a stroke. Insightful and beautifully written.

Red Dust Road by Jackie Kay - a memoir about growing up in Glasgow black, lesbian and adopted. I'll post a review of this book for the LGBT Reading Challenge. This book is a companion piece to her latest poetry collection Fiere, which I reviewed over on Book After Book here.

If you have read these books and have an opinion you want to share about them then you still have time to vote for your favourite here.

As ever, coloured text contains hyperlinks that take you to other webpages where you can find out more.
Shared by Crafty Green Poet at 2:01 pm 1 comment:

'As contemporary poets sing the glories of birds, birch trees, and menstruation, regular guys are left scratching their heads. Who can speak for Everyman? Who will articulate his love for Xbox 360, fo Mama Celeste's frozen pizza, for the cinematic oeuvre of Bruce Willis?'

So begins the introduction to Broetry, a book that claims to offer poetry for dudes who don't like poetry. So there's an instant problem for me here, I'm not a dude and I love poetry. So for this review, I used the services of Crafty Green Boyfriend, who doesn't like poetry (unless I wrote it!), though he's not a Bruce Willis fan and he does like birds and birch trees, so he's not perfect for this purpose, but he's the only guy I know who I can randomly read poetry to, so he'll have to do.

Crafty Green Boyfriend could relate to many of the poems, including Final Final Fantasy (though his weakness is computer games rather than video games per se) and When Patrick Stewart Rules the World (actually I think Crafty Green Boyfriend for a while thought Patrick Stewart did rule the world). He felt that The Road Unable to be Taken Because I'm Trapped Behind a Line of Dudes in Stormtrooper Armor Who Feel the Need to Take Pictures with Every Girl They See Wearing a Slave Leia Outfit was such a good title it didn't need a poem. Being a biologist, but not a fan of peanut butter in any form, Crafty Green Boyfriend was very entertained by On the Origin of Reese's a poem in 14 parts on the natural selection and development of peanut butter cups. He was also totally entertained by Modern Day Heroics, in which the narrator uses his skills at removing spiders from a room to win a woman (even though I'm not scared of spiders!).

I also enjoyed the poems here, they are engaging and clever and written on topics that most people (specially dudes) can relate to. Plus there's a good, self deprecating sense of humour in here:

Classical music. It makes you smarter.
And admit it, you could be more cultured;
you just picked up a book called Broetry.

from Why You Should Listen to Classical Music


So yeah, pick this book up and give it to the men in your life who don't like poetry. Or even those who do.

Broetry by Brian McGackin published by Quirkbooks.
Shared by Crafty Green Poet at 11:32 am No comments:

Email ThisBlogThis!Share to TwitterShare to FacebookShare to Pinterest
Musing on: books, poetry, review

This is a series of five stories set around the River Po. Most of them split themselves into descriptions (of for example the contrast between the river as it flows through towns and cities and as it flows through the countryside) and the story itself. I personally preferred the descriptive passages, but that probably has a lot to do with the fact that I found these passages easier to read. The Italian in these stories is quite colloquial in places! I actually find it quite difficult also to do a longer review of these stories, as I read them in between the novels I was reading and my memory has faded a wee bit, this happens more quickly when I've read something in a foreign language for some reason!


I've not been able to find out whether these stories have been translated into English, but they're definitely worth reading if you read Italian (specially if your Italian is better than mine!).


For Italy in Books
Shared by Crafty Green Poet at 1:22 pm No comments:

Email ThisBlogThis!Share to TwitterShare to FacebookShare to Pinterest
Musing on: books, Italian, Italy in Books 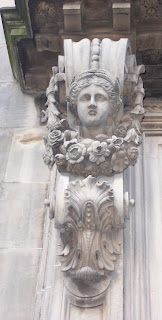 on of the many wonderful architectural details along the Royal Mile, Edinburgh. (Another is the sculpture in the blog header!).
Shared by Crafty Green Poet at 7:18 pm 3 comments:

Our eyes meet
across the room

previously published in Anon Magazine
Shared by Crafty Green Poet at 6:04 am 2 comments:

I won this book in the LGBT Reading Challenge hosted by Brighton Blogger. I rarely read erotica (though you can read my review of a collection of French language erotic haiku here) and it's not giving away any secrets to admit I'm not a gay man. So I'm not really the target audience for this book. Having said that I enjoyed most of the stories in this collection. There's a very wide range from a couple of stories which are almost pornographic in their concentration on sex to the exclusion of any real narrative and at the other end of the range there are some that have so little sexual content that they read more as romantic short stories rather than erotica. This range did get me wondering about how erotica is actually defined....

Some of the stories that I most enjoyed:

Alaska by Trebor Healy - a writer and teacher lives in Alaska for a while where he climbs trees, discovers himself and changes the life of a young man in the local community

Two Hearts by David May - two lovers realise just how much they mean to each other, with more than a little help from their cat, Schrodinger.


for the LGBT Reading Challenge
Shared by Crafty Green Poet at 4:55 pm No comments: