Manchester Voices is a fascinating research project run by a team from Manchester Metropolitan University. The project explores the accents, dialects and identities of people from Manchester in the North-west of England.

The team identified four distinct Greater Manchester dialects - ‘Manc’, ‘Lancashire’, ‘Wigan’ and ‘posh’. Most people would probably say I have a 'posh' accent (and many people tell me I do sound posh), but really I have a Lancashire accent (posh Lancashire?). Of course, my accent has been affected by living in Edinburgh for over 30 years!

There's lots to explore on the Manchester Voices website! You may also be interested in the following articles about the project:

D'you know what I mean? article in the Mancunian Way newsletter

A permanent exhibition of Manchester Voices will be found in the city's central library.

Shared by Crafty Green Poet at 9:07 am No comments:

Her Sister's Shadow by Catherine Wimpeney

Greater Manchester DCI Kay Harris is haunted by the memory of her sister's recent suicide. Concerned for her mental health, her superiors  push her into taking some time off. Kay retreats to her family's holiday home in the Scottish Highlands, taking with her, Ava, a young woman she prevented from committing suicide.

Wimpeney is a former mental health nurse and qualified psychotherapist, and used her experience in writing this thriller. The subject matter is fairly heavy, including issues around expectations of women in the workplace, bullying at work, mental health support and trauma recovery, but the book is lightened by a good sense of humour.

As a birdwatcher, I liked the frequent bird based similes that Kay used to describe things, eg "Their phones rang intermittently, like robins marking territories". I was disappointed that this disappeared from the book quite quickly, though perhaps that was a deliberate attempt to add to the sense of Kay's deteriorating mental health.

It's an engrossing read, though slightly uneven (and perhaps could have done with better editing). Definitely worth reading if you're interested in the issues.

Her Sister's Shadow by Catherine Wimpeney,

The Girl Beneath the Ice by Joseph Darlington

School pupil Tasha Barcroft is found frozen in a river in the middle of a very cold winter. It falls to Inspector Dafydd Todor to find out how she died.

This story focuses on different people in Tasha's life, including her boyfriend Lucas, schoolgirl Frigg who had been bullied by Tasha, Mrs Barcroft, Tasha's grandmother. Did any of these people have motive to kill Tasha or was it in fact Todd, the recluse who lives in a makeshift home in the forest while apparently being employed as a ranger (though he seems to not even know whether he really has a job, making him pretty unbelievable as a character)?

The winter setting is very effectively conveyed through description of the weather and landscape and the book is a real page turner, the reader definitely wants to know what happens next. However, there seemed to be inconsistencies in the plot and in the understanding of the physics of frozen rivers.

Worth a read if you like thrillers set in winter.

The Girl Beneath the Ice by Joseph Darlington.

Under the Bridge by Jack Byrne

The year is 2004, a body has been discovered in the Liverpool Docklands. Anne McCarthy, a new reporter on a local newspaper, is keen to investigate the case and finds that she has let herself in for more than she bargained for.

The body dates back to the 1970s, a time of industrial strife and smuggling.

By getting involved in the investigations, Anne uncovers hidden histories and secrets and the lives of the Wicklow Boys, a group of men smuggling contraband into the docks. Meanwhile, Anne's friend Vinny, who is starting a research project into what makes up the Liverpudlian identity, starts to question what he knows about hos own family history.

This is a thoroughly researched, tautly written thriller bringing in the history of Irish immigration into Liverpool and questions around Liverpudlian identity, while telling an excellent story.

Under the Bridge by Jack Byrne.

You can read my review of Airedale by Dylan Byford (also published by Northodox) on my Crafty Green Poet blog here.

All four books published (2021) by Northodox Press, a publishing company committed to books from the north of England.

Disclaimer: I won these books in a competition on Twitter.

Shared by Crafty Green Poet at 6:30 pm No comments:

Join the Campaign to Save the Edinburgh Filmhouse

Cinema goers were saddened last month when it was announced that the Centre for the Moving Image was going into administration, meaning the end of Edinburgh's Filmhouse Cinema (and its online sister Filmhouse at Home), Aberdeen's Belmont Cinema and the Edinburgh International Film Festival. The reasons given for the collapse of the charity include the effect of the pandemic on reducing cinema audiences (I've rarely been to the cinema since COVID struck and have watched films online including on Filmhouse at Home), the recent huge hike in energy prices in the UK and the general cost of living crisis. In truth, apparently, the signs had been there for years, but the charity hadn't made them public. I think if problems had been made public, then people would have rallied round to save the cinemas and festival before all this happened.

At the same time, one of the major art galleries in Edinburgh has closed its doors until the Spring and there are rumours of other closures across the Scottish arts sector.

We need our cultural institutions! Depending on the film, cinema can offer escapism or directly address the issues that face the world.

So, a campaign has been launched to Save the Filmhouse. You can read about the campaign on the Edinburgh Evening News website here, find out more on the campaign website or follow @SaveFilmhouse on Twitter.

Edited to add: A crowdfunder has now been set up to secure the future of Filmhouse.

Shared by Crafty Green Poet at 1:03 pm No comments:

Shared by Crafty Green Poet at 11:09 am No comments:

Email ThisBlogThis!Share to TwitterShare to FacebookShare to Pinterest
Musing on: haiku, health

A selection of haiku on Under the Basho.

Shared by Crafty Green Poet at 7:09 am No comments:

Email ThisBlogThis!Share to TwitterShare to FacebookShare to Pinterest
Musing on: haiku, health

We cannot speak for you
we have not walked your path
the path that wore down your shoes
the shoes that are now piled high
in glass cases that we file past
silently.


Previously published on Poetry,Songs and Writers of Scotland.
Shared by Crafty Green Poet at 8:25 am 3 comments:

Poetry in the Chess Cafe

“Poetry is like chess” the old man said to me.

He was sitting in the corner of a diner
looking vacantly through the window
at the sunlit city street.

“Not only in the sense” he continued quietly
“of the length of time you need to think.
But also there's an instinct -
the right move or the right word
can arise it seems from nowhere
and inspiration is all around.
For example, I am no past Grand Master
so why do I talk of chess?”

He looked downwards at the floor
where the black legs of the diner chairs
stood quietly on black and white tiled squares.

“Perhaps we are but pawns” he said
“but that is just the starting point
for another poem another day.”

He nodded briefly at me
then turned his gaze back to the street.

Previously published as part of the Ekphrastic Challenge in response to the painting The Poet, by Lily Prigioniero (Italy, b. USA) 2021

I'm looking forward to leading some nature walks in Inch Park in the early summer. I recently had a guided tour of Inch House, which houses the Inch Community centre. 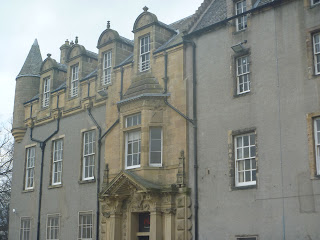 Inch House is based on a traditional Scottish tower house, built in the 16th century. 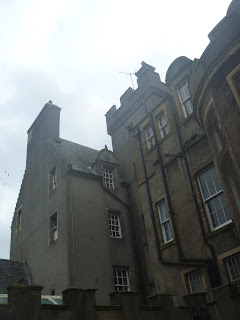 New wings were added to the building in 1634 and again in the mid-18th century. In the 1890s, additions were made round the courtyard in Scots baronial style, giving the building its current appearance. 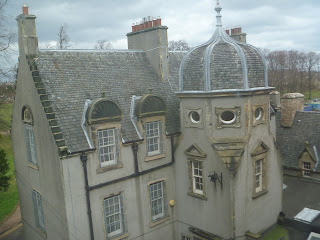 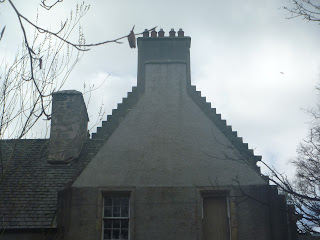 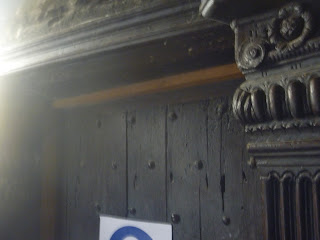 as well as original stone garderobes (toilets). A very narrow spiral staircase leads to a turret, where (apparently!) you can get magnificent views across Edinburgh. (I had to admit defeat on this staircase, I've hated tiny spiral staircases ever since a childhood visit to a lighthouse!) 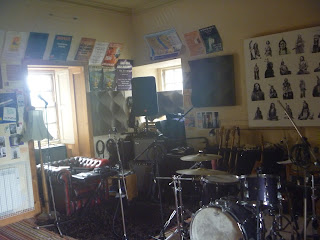 You can find out more about the building here.

Shared by Crafty Green Poet at 3:33 pm No comments:

Not in Our Name (a found poem)

There were mutterings that each day grew louder,
signs and portents that we refused to believe.
Local militia were organizing and drilling
getting ready to answer the call should it come.
Not that people thought that it would come.
They believed, as they hoped,
that something would be done to prevent war…….
As for those others who prophesied and prayed for it,
who wanted the vials of God's wrath uncorked,
they got what they wanted.
Their prayers were answered;
the land was drenched in blood.
But for the most of us
we did not.

Found poem from:A Virginia Girl in the Civil War, 1861-1865: Being a Record of the Actual Experiences of the Wife of a Confederate Officer: Ed. by Myrta Lockett Avary

I originally posted this found poem for Read Write Poem, four years ago, but it seems very relevant to today's situation.