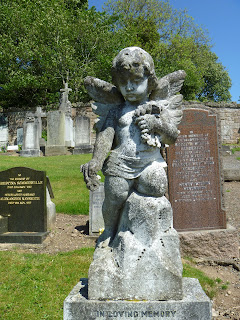 for more shadowy photos from our day in Roslin Glen visit this post on my Crafty Green Poet blog.

I blogged recently about the Edinburgh International Film Festival and mentioned how excited I was by the programme. Yesterday Crafty Green Boyfriend finally got the chance to look through the programme and said it was very disappointing for him, but then we have very different tastes in films! I'm particularly impressed that the festival has ditched the red carpet celebrity focussed strands of the last few years in favour of a more serious, issue based approach (but then I can see a lot of people not agreeing with me on that, as we live in such celebrity obsessed times). I'm also impressed by the number of films that have an environmental theme to them. My views this year are also coloured by the fact that (whisper it) I have a press pass, which means I can see all the films I want to see in return for reviews (mostly over on Crafty Green Poet) and for some general publicity (like this blog post).

Howard of Belvedere Express made a very valid point about the price of Film Festival Tickets in his comment on my first post about the festival, but I'd say:

a) it's better value than the Edinburgh International Book Festival where you pay £10 to listen to an author market their book which they then expect you to buy (I'm not knocking the Book Festival as such, I've been to some great events there - the best ever being last year's reading from two South African poets I had never previously heard of).

b) my secret to the Film Festival is to pick the films least likely to ever get released (because they're obscure or deal with unpopular topics) and to avoid going to films that are likely to get general release - why pay festival prices for a film that will be in all the cinemas only two weeks later?
Shared by Crafty Green Poet at 7:39 pm No comments:

This isn't really something I would normally blog about but some things that have happened recently have annoyed me and another couple have really pleased me so i thought I'd write about them!

Saraband Books held a competition on Twitter, asking people to tweet about Woodlands. I was honoured and delighted that my tweeted haiku won this competition. I was equally delighted by the fact that Saraband sent me a direct message on Twitter immediately asking for my address and congratulating me and telling me when they would post out my prize. I was even more delighted when the prize (a copy of the wonderful Woodlanders book, which I will review on Crafty Green Poet in due course) arrived the next day.

As readers of this blog will be aware, I recently entered a Hollywood Haiku competition on Best for Film, which asked for haiku reviews of films. I sent in two haiku (you can read them in the posts below) and was annoyed when the second one bounced back! I left a comment in their blog and within a few minutes I'd received a reply asking me to send my entry to an alternative email address, which I did. Then today they've emailed all contestants, apologising for the bounced emails, extending the deadline to 23 May and assuring us all our future entries to the competition will reach the organisers!

So those are two examples of good customer care, unlike:

The publisher who shall remain nameless who held a competition on Twitter, which I won, but even six weeks later, after a reminder via Twitter and an email direct to the company, still has not only not sent my prize, but they haven't even communicated with me at all!

The environmental organisation in Scotland, who shall remain nameless, who contacted me, about a month ago, to say they were so pleased that Crafty Green Poet drove a considerable amount of traffic to their website, that would reward me with a substantial free gift. They then have not communicated with me at all, despite me asking them for clarification. I had linked to their website with no thought other than visitors to my blog would enjoy their site and their charity, and never expected to receive anything in return. Now however I have begun to feel antagonistic to this organisation, because their customer care is so poor.

The moral of the story is that if you want to offer a gift or a prize then you make very sure that you actually deliver on your promises otherwise you risk annoying people and losing customer goodwill.
Shared by Crafty Green Poet at 1:52 pm 2 comments:

(a haiku review of 13 Assassins)


This is an entry for the Best For Film Hollywood Haikus blogging competition. Enter now.

Email ThisBlogThis!Share to TwitterShare to FacebookShare to Pinterest
Musing on: film, haiku, review


(a haiku review of Source Code)

This is an entry for the Best For Film Hollywood Haikus blogging competition. Enter now.

Shared by Crafty Green Poet at 7:07 am 2 comments:

Email ThisBlogThis!Share to TwitterShare to FacebookShare to Pinterest
Musing on: film, haiku, review

The 2011 Edinburgh International Film Festival has unveiled a fresh programme mix for its 65th year. The festival is always a major cultural highlight of my year and this year is packed with screenings, new events, collaborations and innovative film experiences. The selection of films looks like the most exciting for the last several years at least.

The festival this year runs from 15 - 26 June and the programme includes:

• Thought-provoking ideas: screenings, debates and events that explore the power of film in topics such as conflict and science
• Experimental events: 24-hour debates, cinema recreations in public spaces, ‘Cineconcerts’ with live music, and live video game performances
• Distinctive collaborations: screening the film favourites of some of the most creative minds in film, music and the arts, plus partnerships with the pioneers of the film and digital world
• Cinema experiences: outdoor screenings, gallery exhibitions and a bike powered mobile cinema

It looks like it's going to be a brilliant festival so if you're in Edinburgh in June make sure you try to get along to some films!
Shared by Crafty Green Poet at 7:50 pm 2 comments:

The Luxury of Exile by Louis Buss

Claude Wooldridge is an antiques dealer and second hand bookshop owner with an obsession with Byron and an impending midlife crisis. When he finds what may be letters leading him to Byron's memoirs he thinks this may be something that will bring meaning left to his life. His profession means that he is acutely aware that the memoirs (and indeed the letter leading him to them) may be a fake and increasingly he is becoming aware that his whole life may be fake. So he rushes off to Naples and buys the old mansion that Byron is reputed to have lived in, where he can uncover the truth.

The part of the novel set in the UK is entertaining, Wooldridge is a colourful and not entirely likeable character and his dysfunctional family and professional life is described in an amusing and insightful manner. Secrets abound, which are revealed gradually through the narrative. Great use is made of the weather to accent mood (though this is perhaps overdone in one scene, where an argument is counterpointed by an ever increasing thunderstorm that becomes rather melodramatic).

However, once action moves to Naples, the book totally deteriorated for me. Rather than Italy acting as a backdrop for adventure, discovery and closure it is a setting for depressing introspection and self involved misery.

The Luxury of Exile by Louis Buss published by Random House

for the Italy in Books reading challenge
Shared by Crafty Green Poet at 3:54 pm 1 comment:

To the Friend Who Did Not Save My Life

This is a fictionalised journal of the author's struggle with AIDS in the relatively early days of the disease (He died of AIDS in 1991.) It is profoundly moving with its meditation on the meaning of friendship and how illness affects friendships and other relationships. It makes an interesting point about AIDS despite its horrors and ravages in some senses being 'kind' because it gives the sufferer time to live the last of their life knowing that they don't have much time left and allowing them to make peace with things. Of course in lots of other ways it isn't at all a kind disease, as is made very clear by some parts of this book.

The book is beautifully written with some humour, making a poignant read. There is a lot of medical information in the book, but the quality of the writing means that this does not distract from the human elements of the narrative. The fact that it is a fictionalised journal does mean that the reader wonders about who some of the characters really are!

For the LGBT Reading Challenge

I won a copy of the Mammoth Book of Gay Erotica in the LGBT Reading Challenge, which I am currently reading and will review sometime fairly soon. As its short stories, it will be a while, as I read short stories a few at a time between novels.
Shared by Crafty Green Poet at 12:55 pm No comments: