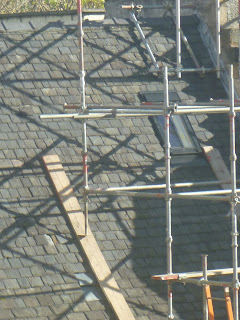 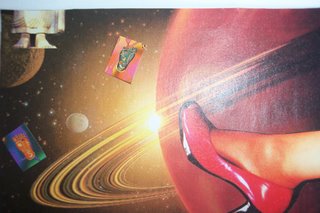 Let me write poems on your feet
in clouds of henna,
take you places you’ve never been.

Come with me to distant galaxies,
my words glowing in your wake
to flare across the night sky

and haunt your dreams


(This poem was previously published in Poetry Cornwall. I made the collage in response to the poem)

I reposted another poem today over on my Crafty Green Poet blog, you can read it here.

Our Ovaries Ourselves - for World Menopause Day

(A long post, in which I rant a little and share far more personal stuff than I normally would but it's an important medical issue)

If you have ovaries, don't let the doctors take them from you (unless you've been diagnosed with ovarian cancer in which case you probably should have them removed as soon as possible).

Your ovaries are vital whether you want to have children or not, even beyond menopause. Even into old age, your ovaries produce small amounts of hormones that help keep you healthy. And removal of both ovaries will send you into a catastrophic, immediate menopause.

If you are diagnosed with an ovarian cyst, in the USA or Canada your gynacologist will likely do their best to preserve both your ovaries, whatever your age. If you're in the UK and you're over 50, your GP and gynacologist are likely to recommend the removal of both ovaries.

DON'T LET THEM DO IT.

Late last year I was diagnosed with a very large ovarian cyst on my left ovary. All the nurses I spoke to and my female GP made reassuring noises that I might not even need surgery as many cysts go away of their own accord. The (female) gynacologist I was referred to however had different ideas. She said that as I was 51 (the average age of menopause) then I no longer needed my ovaries. I was to put it mildly shocked and said little other than 'that seems a bit extreme'. Which it was, particularly as tests showed there was very little chance of cancer.

A male GP from my medical practice then phoned me (why him and not my own female GP I don't know) and he too said that I no longer needed my ovaries. Well by that time I had done my research and I raged at him telling him that women who have both ovaries removed are not only catapulted into a catastrophic medical menopause but have a greatly reduced life expectancy and a greater chance of dying of almost any disease (other than ovarian cancer). I also pointed out that I had not hit menopause myself and in fact was barely perimenopausal so should not be automatically considered to be post menopausal just because of my age.

The male GP and the gynacologist obviously spoke to each other and when I had my next appointment with her she reluctantly agreed that she would allow me to keep my right ovary. I asked if she could let me keep the left one and she said no, the cyst was too big. (And sticky as it turned out, it was the size of a large bread roll and stuck to all my internal organs and took hours to remove, much credit to the surgical team). But even on the morning of my surgery my gynacologist was recommending removing both ovaries and I was still needing to fight to keep my right ovary - an hour or so before surgery! I don't understand her reluctance to let me keep my right ovary, she told me that it was very unlikely I had cancer and if I had had cancer and she had removed the right ovary she would still have needed to go back in to give me a full hysterectomy.

Anyway, it's all months ago now and I've made a full recovery and have still not hit menopause, in fact I'm still barely perimenopausal.

Some women might not have the confidence or the energy to fight to keep their ovaries and I know women who have had terrible experiences of catastrophic surgical menopause in situations where it probably wasn't necessary. So do your research and if you are diagnosed with ovarian cysts then make sure your doctors know you want to keep your ovaries.