Thinking in Numbers by Daniel Tammet

This is a brilliant book of essays that I won in a Goodreads First Reads Giveaway.

Each essay looks at a different aspect of maths in an accessible and engaging way. Many of the essays are in fact as much about linguistics as about maths. Hence we learn how to count to four in Icelandic (and other languages), find parallels between proverbs and the times tables and connections between calculus and the work of Tolstoy. Other essays muse on the nature of the ideal city, the connections between maths and art and whether there is intelligent life elsewhere in the Universe.

Every essay, though very short, will get you thinking deeply about all sorts of things without ever feeling like hard maths.

A fascinating book, which I would totally recommend to anyone interested in maths or linguistics and literature.

Thinking in Numbers by Daniel Tammet published by Hodder and Staughton.
Shared by Crafty Green Poet at 7:33 pm No comments:

We're delighted to be hosting Sylvain, the French travelling Moulin Roty bunny from Cottontails Baby! He is equally delighted to have found a shelf of French books in our flat! 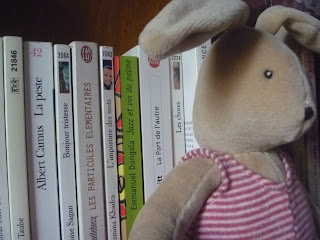 You can read more over on Crafty Green Poet here.

As ever, coloured text contains hyperlinks that take you to other webpages where you can find out more!
Shared by Crafty Green Poet at 7:13 pm No comments: