Women in the Archives

Yesterday I attended a very interesting panel event at the National Library of Scotland about women in literary archives.

Attention has traditionally focused on the writings of male (usually white) authors, and this event sought to question this focus by considering the relationship between archives and literary reputations. The speakers focussed on individual authors to address how the relative absence of women writers from official archives has contributed to their relative scarcity in the literary canon and to explore the relationship between a writer’s archive and their literary status.

Jenni Calder spoke about Scottish poet, botanist and plant collector Isobel Hutchison and her travels in the 1930s in Alaska. I was particularly interested to hear about Hutchison since I had recently read Andrea Wulf's fascinating book The Brother Gardeners (which I briefly reviewed over on Crafty Green Poet here).

Donna Campbell of Washington State University then spoke about the various cinematic and theatrical adaptations that have been made from the novels of Edith Wharton and how they were received by audiences compared to the novels themselves (audiences of an early adaptation of The House of Mirth for instance were unhappy with the death of Lily Bart at the end of the play, though they apparently had had no problem with that as the ending of the novel, I think that's still the case today to some degree).

After a short break Imaobong Umoren talked about the invisibility of black women in the archives, focussing on the life and work of Una Marson who moved from Jamaica to the United Kingdom to further her literary career but struggled to find work due to racism. She was a poet, playwright and the first black woman employed by the BBC.

Finally A N Deevers introduced her new business, The Second Shelf, a rare book dealership (soon to open up a shop in London) which aims to redress the balance between female and male writers in the rare books trade. She produces a beautiful journal that doubles as a catalogue (but is so much more than a catalogue and looks like a great read!) and is approaching the whole enterprise with an inspiring mix of imagination and determination. 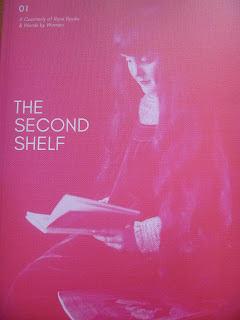 This event was a collaboration between Transatlantic Literary Women and the National Library of Scotland.
Shared by Crafty Green Poet at 7:05 pm No comments: