Seeing the film Museum Hours, which I reviewed yesterday reminded me of my trip to Vienna in 1998. Here are some of my favourite photos from the trip: 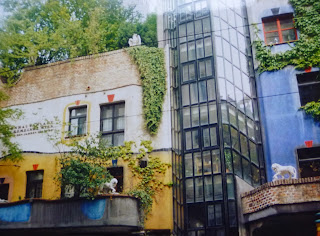 The Hundertwasser House, designed by architect, artist and ecologist Hundertwasser.
A wonderful and fascinating building! 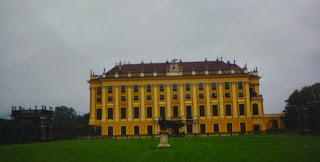 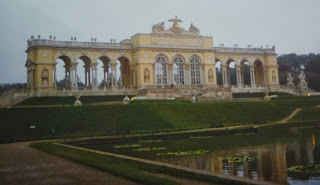 The Glorieta at Schloss Schönbrunn. 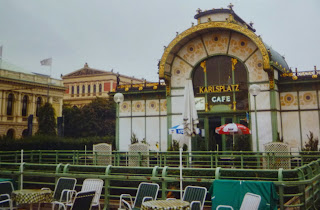 Karlsplatz - an Underground Station that became a cafe. 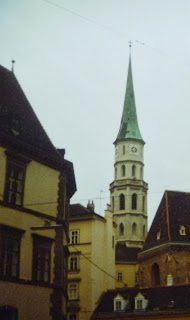 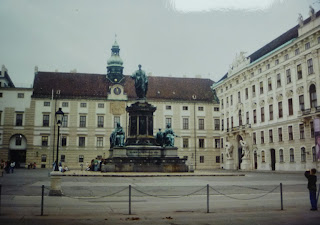 does anyone know the name of this building in the centre of Vienna? 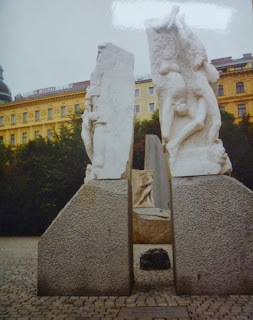 Albertina Platz Memorial against War and Fascism
By Austrian artist Alfred Hrdlicka [1928-2009]. This square is the site of a massacre in 1945 when an Allied bomb killed an unknown number of civilians taking shelter in the basement of a building.

As ever, coloured text contains hyperlinks that take you to other webpages where you can find out more.
Shared by Crafty Green Poet at 11:36 am 1 comment:

Museum Hours is the story of Anne, a Canadian woman in Vienna to care for a distant relative who has fallen into a coma. She speds a lot of time in the city's Art History Museum and is befriended by one of the guards there who acts as her unofficial guide to the museum and to selected aspects of the city.

The two discuss the meaning and value of art, politics and their life experiences, while wandering round the Museum, various coffee shops and the wintry streets of Vienna.

The film sometimes feels like an advert for the museum and in particular its Breughel collection, though the wider city doesn't come out of it looking quite so wonderful, as the clouds never seem to lift and the camera lingers on building sites and run down street corners.

However the film is a particularly intelligent tour guide, juxtaposing as it does scenes from the museum alongside the flea markets of the city centre and taking a tour into the underworld of a lake grotto just as Anne's relative slips into death.

Its a lovely, meditative film for anyone interested in art history or in Vienna.

Museum Hours is on at Edinburgh Filmhouse until Thursday 26 September.

The film reminded me of my visit to Vienna, many years ago now and I may see if I can transfer some of my photos onto the computer and write about the visit!
Shared by Crafty Green Poet at 5:13 pm 2 comments:

Email ThisBlogThis!Share to TwitterShare to FacebookShare to Pinterest
Musing on: Edinburgh, film, review 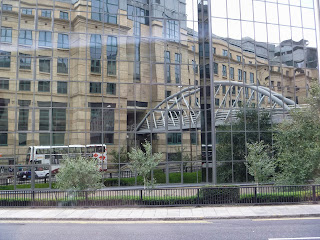 I took this photo from the bus as we waited for the lights to change.

This street used to only be used by a few buses, but since the saga of Edinburgh's tram works began, diversions have been in place and all buses in this area of town now use this street.

Apparently the trams will start running next Spring.....